How to find better ways to a summit or This time from south. Mike and I had climbed Ben Macdui via Cairn Gorm in September 2002 on a very hot day in late summer. The approach over the plateau by way of Corrie Cas, Ptarmigain Restaurant and Stob Coire an Lochain had been a mixed bag of not so scenic tourist installations and of beautiful landscape before we reached the summit. In 2008, the approach from Deeside proved to be much more satisfying.

Starting at the Linn of Dee we cycled up the easy landrover track by the Lui Water to Derry Lodge where we left the bycicles. We crossed the Derry Burn and walked into the old forrest in Glen Derry with its enchanting atmopshere. The path was well engineered so we slowly but steadily gained some height. Near the northern end of the forrest we saw a big capercaille in a tree. As soon as the animal spotted us it flew down the glen. Great bird and a big one at that!

We recrossed the Derry Burn, continued up the wide and flat glen, took in the views of Derry Cairngom to the left and finally reached the fork in the path where we turned left and headed up Corrie Etchachan. A few minutes before reaching the Hutchinson Memorial Hut we took a break and basked in some sunshine while resting on a rock. Then the hut came into view. This bothy is very nicely situated in the corrie bowl. The corrie has a rather alpine feel about it with a lot of loose scree, rocky walls and only little vegetation. A very quiet and contemplative place and a great location to build a hut. 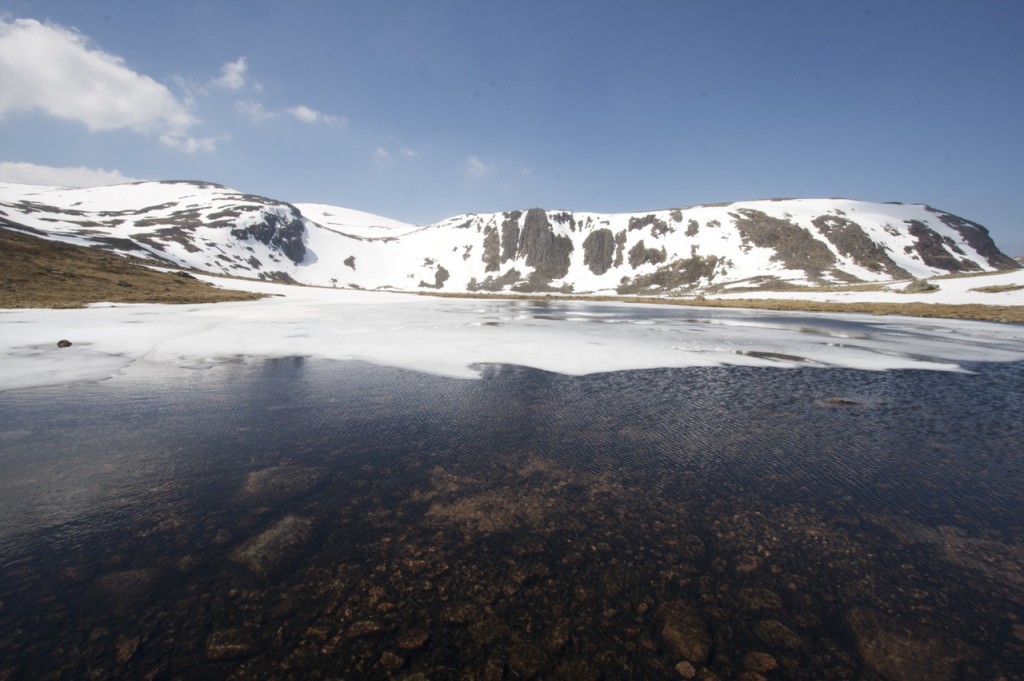 The next 250 metres in height were quite steep but that was just as good as very soon we reached Loch Etchachan, which was frozen over, of course, as described in many a book. It is difficult to do the beauty of the place justice using words so I won’t try. The snow, the rocks, the water, the ice, the sun and the blue sky!

Frank and I climbed some more metres and then contoured around Creagan a’ Choire Etchachan. Then the broad back of Derry Cairngorm came into view 2 km further south. We tramped on, used some snow fields ascending the steeper parts of the mountains spine and finally reached the summit of Munro No. 1 of the day. Exhausted we rested among the summit rocks and enjoyed the views for quite a while. We were joined by some walkers who had used the long south ridge of the hill as their route of ascent. This place is a marvellous view point! But, but other challenges were lying in wait.

So after half an hour or so Frank and I returned to the whereabouts of Creagan a’ Choire Etchachan skirted the western flank of the hill using a path at the 1000 m contour line and then headed up the ridge forming the north-western wall of Coire Sputan Dearg. The last rise before reaching the plateauish terrain of Ben Macdui’s summit slopes was one long brilliantly white snow field. Ah what a great day: For minutes the only colours were the blue of the sky and the white of the snow! Once on the plateau we tramped over slushy snow and soon reached the summit of Ben Macdui. Sunshine and wind. Well, as usual the views from the summit of Ben Macdui were not so good since it towers above all other hills and its very flat summit dome conceals many of the other intersting features of the other, lesser hills.

On we went, crossed the corrie of the Tailor’s Burn high up using another splendid snow field. Here the Lairig Ghru and the hills on the other side of this great glen we visible in great clarity in the blasting sunhine! Yippie! Then it was down the ridge towards Carn a’ Mhaim. My knees and ankles hurt on that descent, I can tell you. From the col we climbed to the summit of the last Munro, ate our final apples, drank some water, sat there quite exhausted and gathered our strength for the long walk out.

From Carn a’Mhaim’s summit the path first lead down the southeast ridge and then dropped to Glen Dee very steeply. Once on the vally floor we headed for the Luibeg Burn and Luibeg Bridge. From there it was a nice swift walk back to Derry Lodge, our bikes and the last five kilometres to the Linn of Dee on the back of our faithful steel horses. This day was easily the best tour of the spring 2008 hiking holiday! And: I can now claim to have traversed the central part of the Cairngorms north to south – in two legs six years apart :-).

To see this map cookies and javascript must be enabled. If you are still having trouble after having checked both of these please contact us using the link at the top of the page

Description Ben Macdui, with its two neighbouring peaks Carn a' Mhaim and Derry Cairngorm, form the central massif of the Cairngorms between the two great passes, the Lairig Ghru and the Lairig an Laoigh. Ben Macdui is a huge dome with fairly steep slopes all round except to the north where a great plateau extends to Cairn Gorm. Carn a' Mhaim is joined to Ben Macdui by a long narrow ridge which drops precipitously on its west side into the Lairig Ghru. Derry Cairngorm forms a long ridge on the west side of Glen Derry with its prominent summit cone at the north end.Ben Macdui can be climbed equally well from the south by Glen Lui and Glen Derry, or from the north across the Cairn Gorm plateau, but the other two mountains are best climbed from Glen Lui, and the traverse of the three from the south is one of the best day's hillwalking in the Cairngorms, albeit a long one.Start from the carpark at the foot of Glen Lui and go up the glen and its continuation along Glen Luibeg. After crossing the Luibeg Burn climb the easy slopes of Carn a' Mhaim, whose summit is a very fine viewpoint for the great mountains at the heart of the Cairngorms. Continue along the north ridge, which is narrow and exposed on its west side, and at its end climb north-east to the summit of Ben Macdui. Descend east then north-east by a path which drops towards Loch Etchachan, but before reaching the loch turn south-east along the ridge of Derry Cairngorm. Continue over the bouldery summit cone and along the ridge over Carn Crom to Derry Lodge and the road down Glen Lui.