“The best laid plans of mice and men often go awry” as the text from a poem by Robert Burns says. The intention to bag our final Munros in June 2017 had come to nothing when less than perfect tour planning and even less perfect weather conditions had seen us do only six successful hill walks during the nine days we spent in Alba. The sub-optimal use of our time left us with a total of 280 Munros bagged and A’Mhaighdean and Ruadh Stac Mor still unticked when we left Scotland in early June. After a few days back in Germany it became clear to us that we did not want to wait until 2018 for the compleation to take place. We checked our calendars and decided that the weekend of 9 and 10 September 2017 would see us back in Scotland to return to the Fisherfield Forest.

So when we landed at EDI on Friday 8 September we were looking forward to our compleation weekend. Off we went in our cosy little Audi A1 towards the Northwest Highlands. We stacked up on provisions for the weekend and on gas for our stove in Aviemore. At around 5:45 p.m. we reached Corrie Hallie, slipped into hiking clothes and shouldered our really heavy rucksacks. At 6:10 p.m. we left the parking and embarked on the hike towards Shenavall Bothy some eight kilometres away in Strath na Sealga.

The going on the track was good but the heavy load slowed us down considerably. It took us about one hour to reach the cairn beside the Landrover track that marks the starting point of the footpath to Shenavall that skirts around the lower slopes of Sail Liath of An Teallach. Rain kept coming down on us. In fact the whole week had been very wet in the West. Soon after the highest point of the footpath had been passed the track dissolved into a muddy and boggy quagmire interspersed with the all so well-known slabs you can find all around An Teallach. We made tiresome progress but got nearer and nearer to the bothy. On the flattish terrain before the ‘path’ enters the steep little gorge beside Meall a Chlaiginn we began to encounter some route finding problems due to the fading light. Sunset had been around 7:15 p.m. and dusk was quickly giving way to darkness one hour later. Out came our headlamps. The final kilometre to Shenavall was quite treacherous indeed. It saw us trying to find the track beside the steep burn that tumbles down the little gorge. Every step needed to be taken with care since the terrain was wet, wet, wet and the heavy rucksacks made their presence felt. I was delighted when Frank shouted “I see windows” by which he meant the reflections of some last light in the sky on the bothy windows.

We were both thoroughly relieved to enter the dark and cold but dry main room of Shenavall Bothy at 8:40 p.m. Off went our wet clothes, some candles were lit and the gas stove was assembled to cook our evening meal of dehydrated expedition food. Thus invigorated out came two cans of beer each and some whisky and soon the sooty and dark bothy felt like a little island of human civilization in a dark and wet wilderness. Which in fact was true if you think about it. By 10:30p.m we were off to the upstairs and downstairs sleeping rooms and dozed away in our comfy sleeping bags both thanking god that we did not have to pitch our tents on the wet and midge infested grass outside. By midnight another Welsh/Scottish couple of hikers arrived who had done the same tramp as us but in complete darkness! They lit a fire and I rose to say a sleepy hello to them. They seemed even more relieved than us to have made it to the bothy!

Saturday 9 September saw Frank and me rise with the sun at 06:30 a.m. to prepare breakfast and to pack our rucksacks. By 08:00 a.m. we set out to climb our last two Munros. From Shenavall we headed for the flat and swampy area where the Abhainn Gleann na Muice and the Allt Strath na Sealga unite to form one river. We managed to find a suitable spot where it was possible to cross the river from one gravel bank to another gravel bank on the far side. Boots dangling from our necks and trousers stuffed into the rucksacks we waded the thigh-deep and cold water in our underwear. The clothes came on again on the far side of the river and off we went towards Larachantivore.

Once we reached the two houses we picked up the path beside the Abhainn Gleann na Muice and followed the river for about two kilometres. A path branched off following the left bank of the burn in Gleann na Muice Beag. We followed this path until the end of the glen where it climbed about 300 metres in nice zigzags to deposit us on the rather desolate and flat terrain that holds Lochan Feith Mhic-illean. From there we had the first view of Ruadh Stac Mor and could even see the summit from below. It was to be our only unobstructed view of one of the summits. We continued first above and then beside the loch for two kilometres and then crossed its outflow – with considerable difficulty. The path leading to the bealach between A’Mhaighdean and Ruadh Stac Mor was obvious and easy to follow if not quite as well-engineered as had been the rest of the approach path. At 12:45 p.m. we finally arrived at the bealach, where we left our rucksacks.

On came the rain-proof gear since a slight drizzle which we had expected all morning had finally set in. It was not too difficult to find the breach in the bands of crags that guard the upper slopes of Ruadh Stac Mor. Once above the crags it was easy to pick up a faint and rough but cairned path through the summit boulder field of our Munro no. 281. We reached the summit at 1:15 p.m. and sat down beside the summit shelter doubling for a cairn and the trig point to eat a chocolate bar. No views to speak of. Damn! We were back at the bealach in no time had a sip of water and then headed up the northeast ridge of A’Mhaighdean in driving rain. The path was mostly easy to follow, a few steeper sections giving us just a bit of hand work to do but finally we arrived at the north top of A’Mhaighdean and headed towards the main summit hidden in the clag and battered by strong rain. We reached the small rocky summit perched above the cliffs where paths converge on a surprisingly small cairn. And so at 2:30 p.m. Frank and I bagged our final Munro by touching the cairn simultaneously at the count of three. 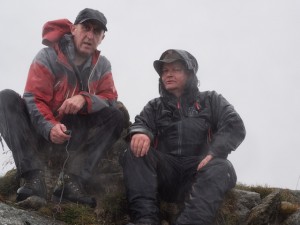 Frank set up his camera on a small tripod and took a number of photographs of two exhausted, wet hillwalkers at the cairn who definitely did not look like they were enjoying a moment of pure triumph. And again: No views at the summit of the hill with arguably the best views in all of Scotland. A real pity!

The return leg of the hike followed the same paths as the outbound leg and at about the 600m contour we appeared from the clouds, the rain subsided and we could see some landscape again. The further we got on our way to Shenavall the better the weather turned out to be so that when we had waded the Allt Strath na Sealga for a second time our clothes had almost dried on our skin. We reached Shenavall at about 7:30 p.m. and were greeted by our Welsh/Scottish companions of the night before, a group of four Scottish students and three long distance walkers doing the Cape Wrath Trail. 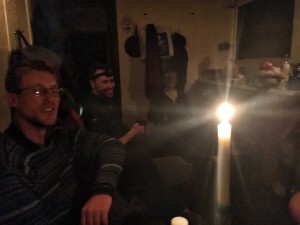 Frank and I had intended to walk out and spend the evening in Ullapool but we had returned way too late to the bothy for that to seem reasonable. Much rather we spent a second night at the hut and celebrated our compleation together with the friendly crew assembled around the fireplace which was warming up the place with a nice coal fire topped up with the occasional log. Bottles of Whisky made the round and the last few of us went to sleep at around midnight.

The next morning Frank and I bid goodbye to everybody and returned to civilization by way of Achneigie and the Landrover track starting there. This track climbed steeply out of Strath na Sealga and re-joined the inward route at the cairn of the Shenavall footpath mentioned above. After three and a half hours of walking and maybe twelve km covered we were glad to reach our car at Corrie Hallie at 12:30 p.m.

This little adventure rounded of our first (and probably only) Munro round. It was a very fitting end to a campaign lasting more than a quarter of a century. During those years we got to know the Highlands fairly well. And we learned that the way up the hills is hardly ever a mere tramp up some rocks but also a journey that teaches you one or two important lessons about yourself and about the friends you have the privilege of accompanying to the summits.

Frank and I will continue climbing hills in Scotland focussing on the more interesting and beautiful hills and leaving out the more monotonous plods. That should keep us busy for the next few dozens of years. Haste ye back!

To see this map cookies and javascript must be enabled. If you are still having trouble after having checked both of these please contact us using the link at the top of the page

Description These two mountains, which are among the remotest and least accessible in Scotland, lie in the heart of the wilderness area of the Letterewe and Fisherfield forests. The chief attraction is their superb situation in a land of rocky mountains and lonely lochans and the feeling that the long walk required to reach them gives a strong sense of exploration in wild country. A'Mhaighdean has a fine profile when seen from the west, its south face buttresses and rocky north-west ridge rising steeply above the Dubh Loch. Ruadh Stac Mor is a typical sandstone mountain, with steep terraced cliffs round its western end.The very long approach starts at Poolewe and goes along the private road beside the River Ewe to Inveran and Kernsary. Go along the track and path south-eastwards below Beinn Airigh Charr to the causeway between Fionn Loch and Dubh Loch. Continue past Carnmore round the north side of Dubh Loch, following the path east below Sgurr na Laocainn, and when it turns north-east leave it and make for the north-west ridge of A'Mhaighdean near Fuar Loch Beag. Climb this fine ridge to the summit. Descend north-east from A'Mhaighdean down grassy slopes to the col below Ruadh Stac Mor and climb the short steep slope to its summit. Return to the col and go north-west along a path on the north side of Fuar Loch Mor to join the stalker's path leading down to Carnmore and the long return to Poolewe.